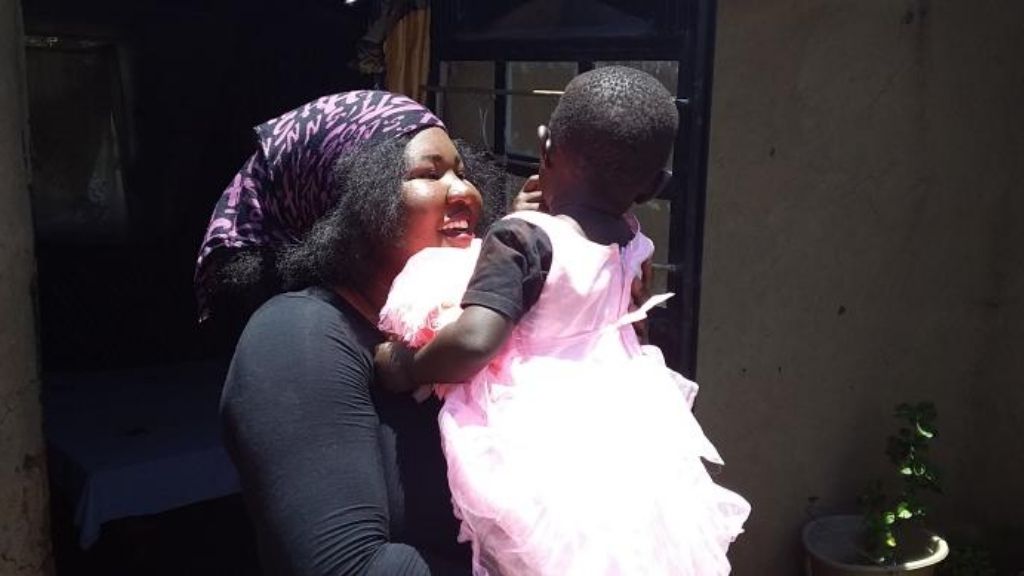 According to the Standard,

“At their home in Likuyani, we find the girl zestful, just like a toddler her age would be.”

“Wearing a pink dress and matching pink boots, Bibian comes closer to have a look at our cameras, recorders and tripod stand”.

“Her small frame masks the pain she has endured in just over two years; she has battled and overcome cancer”.

“She was born weighing 4.2kg,” Andeso says. “She looked healthy.”

“When the baby turned four months, she developed acne (pimples), her breasts also enlarged, and she began to develop pubic hair”.

“About a month after the symptoms appeared, the baby started bleeding from her vagina. “The bleeding lasted five days,” Andeso says”.

By this time, all manner of questions were swirling in the new mother’s head. She took her daughter to hospital. At the time, her family lived in Kitengela, Kajiado County. “She was treated for a blood infection. She was given antibiotics,” Andeso says.

Nothing changed. The following month, she bled again, “like she was having menses.”

Andeso moved from one hospital to another searching for proper diagnosis and treatment. But nothing much came of it.

In December 2019, the family travelled up country to mark festivities.

“At some point, my mother was bathing Bibian and she noticed that the girl was bloated. She advised me to take her to hospital. I attributed the bloating to her big body because I am also big bodied.”

They went to Likuyani Sub-County Hospital where medics prescribed antibiotics and medicine to treat bloating and indigestion.

“But my daughter’s symptoms got worse. She now had no appetite, was breathing heavily and could not stomach food,” Andeso says.

They went back to hospital. She was asked to do an ultra sound.

Results showed that Bibian’s abdomen was filled with fluids. The patient was referred to Moi Teaching and Referral Hospital (MTRH).

Andeso went to MTRH on December 26, 2019. The baby was admitted and a fresh round of tests and scans ordered.

“Around 10am on January 7, 2020, we were in the ward when I saw many doctors come in. One of them – their leader – called out my name and I responded.

“He then explained that Bibian had a growth in her reproductive system. It was the growth that was producing fluids.

“He recommended surgery – immediately. My heart sank. I feared that she wouldn’t make it through surgery,” Bibian says.

The lead doctor was, Elly Odongo, an obstetrician and gynaecologist and the head of gynaecological oncology at MTRH.

“Bibian’s case was brought to my attention in early 2020. From tests, the girl had a type of ovarian cancer known as sex cord stromal tumour,” Dr Odongo says.

Andeso had many expectations of motherhood. But she never expected anything close to what she was hearing from the doctor.

‘Cancer? Of the ovaries? In a baby? I thought this disease only affects women of reproductive age,’ she recalls wondering.

The tumour, Odongo says, was functional: meaning it was producing hormones – oestrogen and testosterone.

This explains why the little girl presented with symptoms of a child entering puberty.

“The blood she was shedding is equivalent to menstruation in a woman of reproductive age. Of course, in an eight-month-old, this means something is wrong,” Odongo says.

The following day, Odongo and his team operated on Bibian and removed the tumours. The surgery was followed by chemotherapy – which Andeso says was brutal on young Bibian.

She, however, needs immune boosters and multivitamin supplements to help her fight common infections as chemotherapy affected her immunity.

It has been a roller-coaster two years, Andeso says. Her daughter’s battle with cancer, she says, has cost her friendships, her (old) job, peace of mind, and marriage.

She says the family has spent over Sh1.5 million since the first hospital visit.

“Of course we don’t have that kind of money. A lot of it came from friends, church, relatives and well-wishers. I also took loans; which I am still repaying.”

Before taking Bibian to hospital, Andeso had contemplated traditional medicine.

In fact, one of her grandfathers, upon examining the girl, declared that she had been bewitched.

The old man prescribed herbal concoctions for Bibian to drink and bath in.

“We did that for two weeks but her condition got even worse,” she says.

Andeso is lucky that she acted quickly. Bibian’s cancer was at stage 2(a) when she was taken to MTRH.

Had she waited longer, Odongo postulates, chances of successful treatment would have dwindled.

“Success in treating cancer increases with early diagnosis. Ovarian cancer in older women is a silent killer because at least 80 per cent of women who get diagnosed with the disease are usually at stage 3 and above. Survival at this point is reduced as the cancer spreads,” he says.

Odongo advised parents of young girls to be on the lookout for symptoms that mimic puberty.

“The median age for ovarian cancer patients is 47 years,” he says.

September is ovarian cancer awareness month. Bibian, despite her age, is leading in awareness creation.