This is according to a statement signed by the NDLEA Media Director, Femi Babafemi on Monday.

According to the agency, the arrest was made at the Murtala Muhammed International Airport, Lagos after months of surveillance and evading arrest.

IMPORTANT: You can Click “HERE” to receive News updates directly on your WhatsApp!

The suspect, Chief Afam Mallinson Emmanuel Ukatu, is an entrepreneur and Managing Director of Nispon Porcelain Company Ltd, Nigeria’s first indigenous floor tiles and PVC manufacturing company, located in Ogun State and other parts of the country. He is also the the chairman of Mallinson Group of Companies.

Recall that the Nigerian Police on February 14, 2022 handed over DCP Abba Kyari, the erstwhile Commander of Intelligence Response Team (IRT) and four others: ACP Sunday J. Ubua; ASP Bawa James; Inspector Simon Agirgba and Inspector John Nuhu to the NDLEA over involvement in a 25 kilograms Cocaine deal and running of drug a cartel.

The suspended Deputy Commissioner of Police and his team were also linked to an alleged seizure of a large consignment of Tramadol in a warehouse at Amuwo-Odofin area of Lagos which worth N3billion imported into Nigeria by an individual who claimed to be a pharmacist.

WITH SCHOLARSHIPS, YOU CAN TRAVEL ABROAD FOR FREE | APPLY NOW

Scholarship Region - May 10, 2022 0
The University of Maine Postgraduate Scholarships for International Students has commenced applications for interested and qualified candidates willing to study in the USA.The scholarship...

Kyari who is currently being remanded at Kuje maximum prison in Abuja had earlier being suspended by the police after the United States’ Federal Bureau of Investigation (FBI) indicted him in the fraud case of a popular fraudster, Ramon Abbas, known as Hushpuppi. The US authourities said Kyari was a conspirator with Hushpuppi in a $1.1 million deal to defraud a Qatari businessman.

According to Babafemi’s statement, Chief Mallinson Ukatu has been a major importer of large consignments of different brands and high dosages of Tramadol Hydrochloride, ranging from 120mg, 200mg, 225mg and 250mg.

He added that the suspect owns pharmaceutical and plastic manufacturing companies, which he allegedly used as a cover to import illicit drugs into Nigeria, apart from the fact that he owns about 103 bank accounts majorly used for money laundering.

“After months of surveillance and evading arrest, Ukatu who is Chairman of Mallinson Group of Companies was eventually nabbed onboard a flight to Abuja at the MM2 terminal of the Lagos airport, Ikeja on Wednesday 13th April. Kyari and four top members of his team are already facing trial for a different but similar offence at a Federal High Court in Abuja,” the statement said. 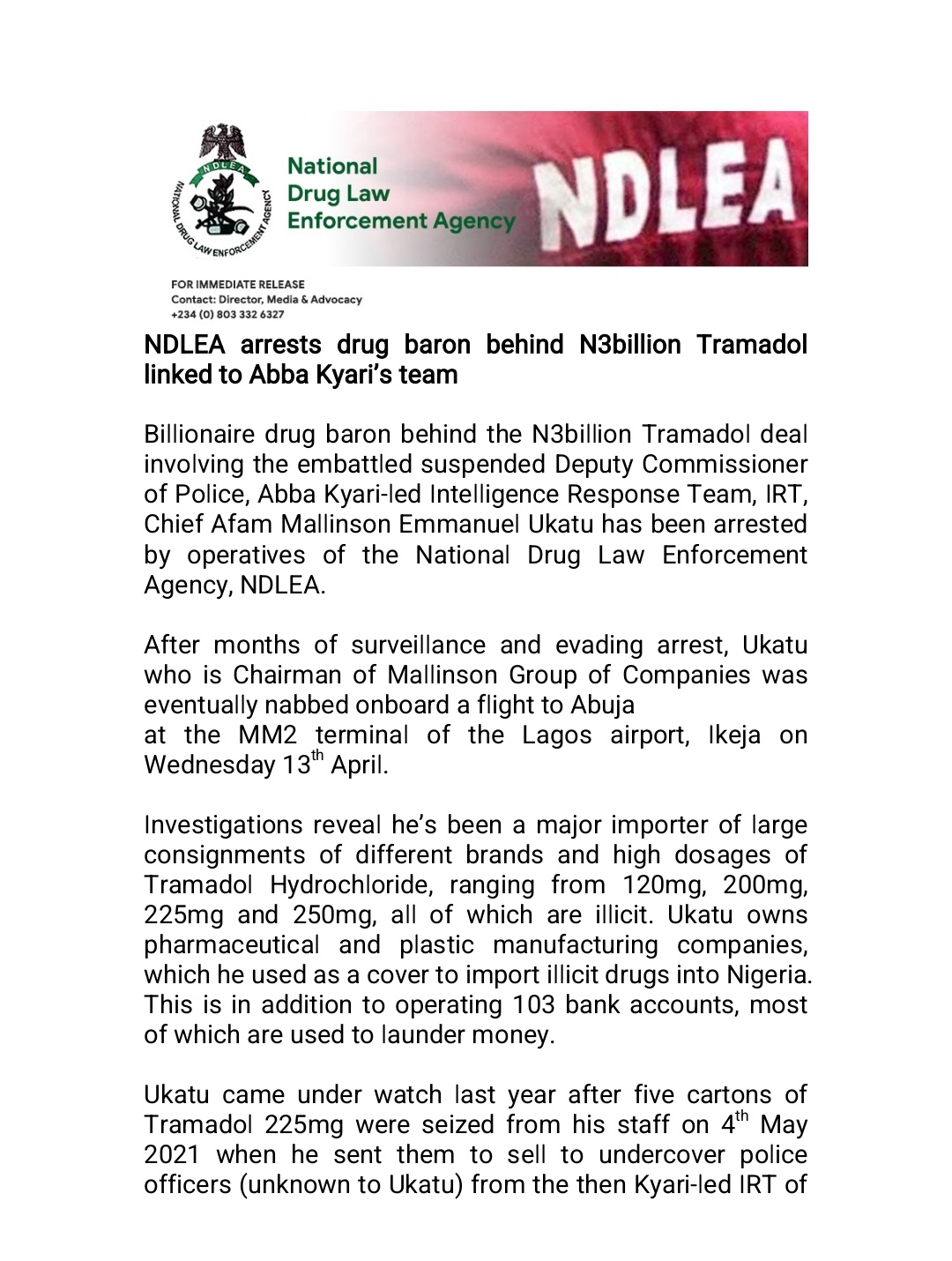 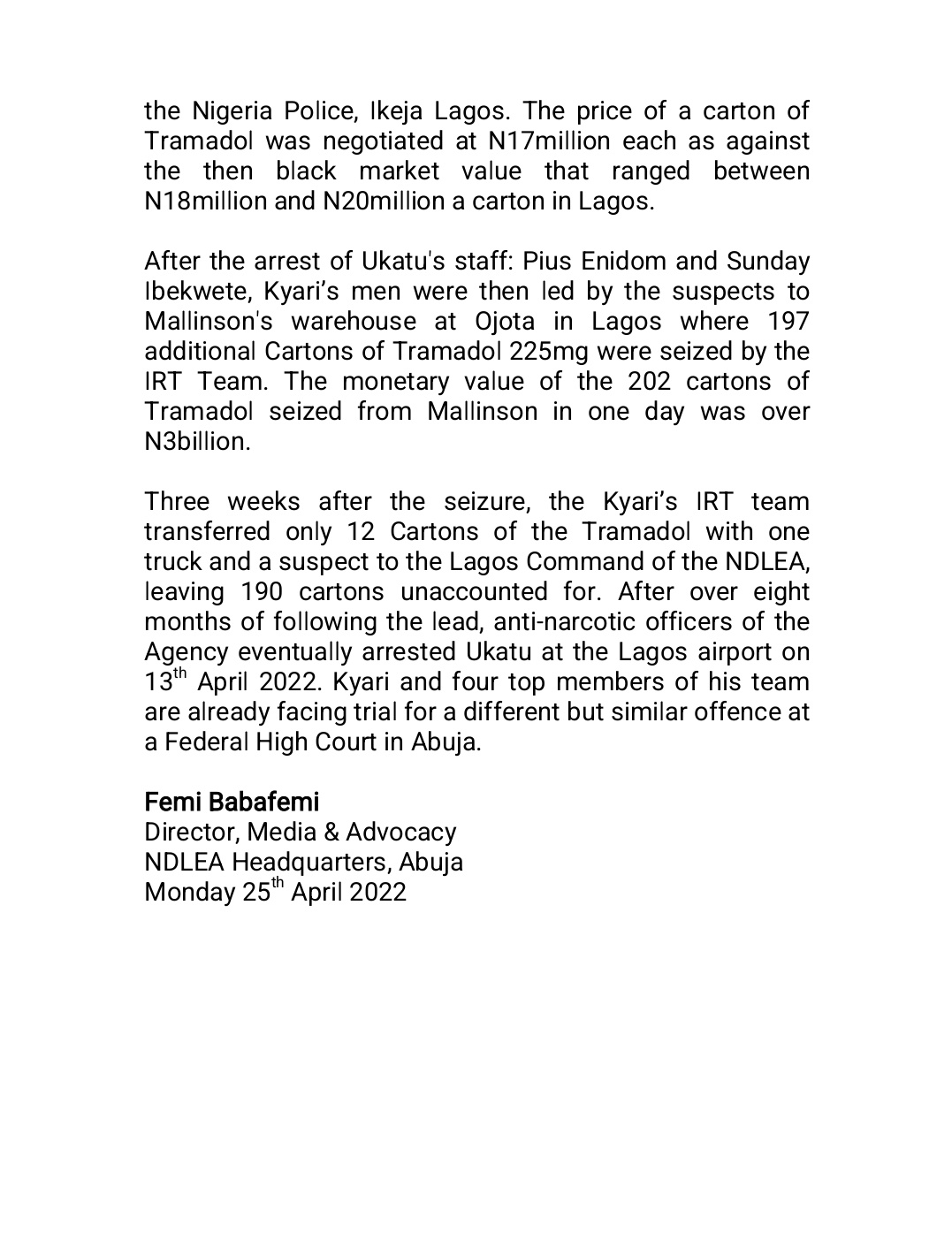 BREAKING: JAMB explains why some UTME results were withheld