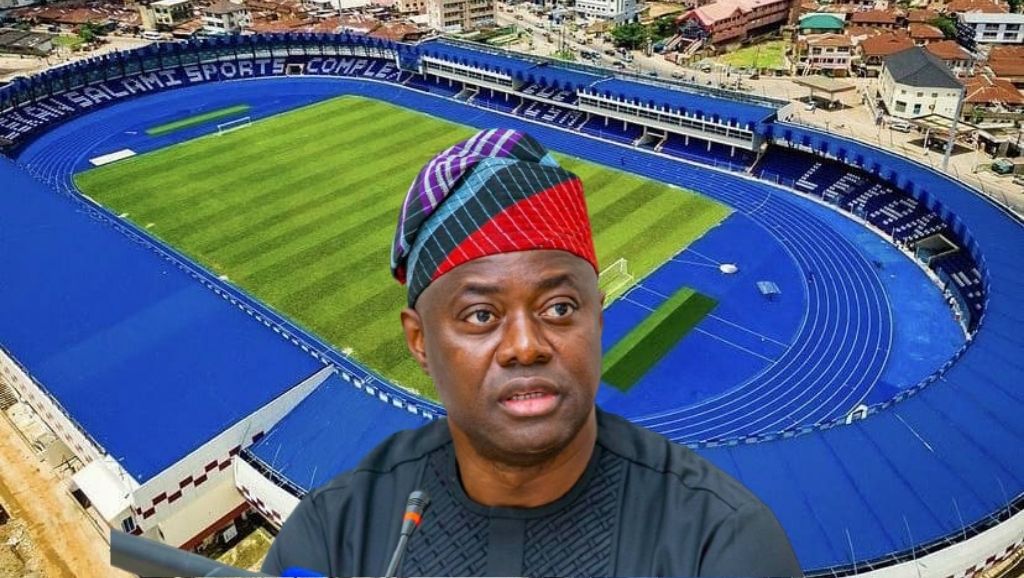 The inauguration of the remodeled Lekan Salami Stadium, Adamasingba by the Governor Seyi Makinde’s administration at Ibadan, Oyo State was marred by a heavy rainfall in the late hours of Wednesday.

The stadium which was reported to have been renovated by a whooping N5.5bn hosted lots of dignitaries to honor the inauguration. Ex-Super Eagles players including Jay-Jay Okocha among others were present, former Nigeria’s Vice-President Atiku Abubakar and so many other dignitaries were present for the inaugration.

The event however took another drastic talking point when rain started as our correspondent who was present at the event recorded live videos showing how the roof of the newly launched stadium has lot of holes, forcing fans and well wishers to vacate the stadium to safeguard themselves from getting wet.

The field on which a football match was ongoing could also be seen totally flooded as players struggle with the sporting actions.

Citizens of the state and analysts of the Governor Seyi Makinde’s administration took to their social media handle to raise questions on how such a happening could ruin the activities in the stadium despite spending over N5.5bn on the remodeling project.

Another talking point of the event was how security agents of the stadium blocked Oyo monarchs from attending the inauguration event.

It was reported that Alaafin of Oyo, Oba Lamidi Adeyemi and the  Olubadan of Ibadanland, Oba Saliu Adetunji, left the Lekan Salami Sports Complex in anger after security operatives deployed at the entrance of the newly remodeled stadium prevented them from going in.

The traditional rulers had gone to the stadium with their aides but the security agents stopped them.

It was learnt that the 82-year-old Alaafin and the 93-year-old Ibadan monarch were made to wait for almost 30 minutes as the security agents at the gate were said to have insisted that just one of the aides would be allowed to go in with each of the monarchs.

One of the people, who saw the scene, said there was pushing and shoving at the gate and the monarchs left the venue in anger.

The spokesman for the Olubadan, Chief Adeola Oloko, who was contacted on the telephone by PUNCH, confirmed the shabby treatment of the royal father.

Responding to the inquiry sent to him, Oloko said, “Very true despite having the entry requirements.”

Oloko said the monarch did not have anything against Governor Seyi Makinde, who he said, did a wonderful job but blamed the overzealous security agents for what he called lack of discretion.

The spokesman for the Alaafin, Bode Durojaye, also confirmed the incident.

He said, “Overzealousness of the security agents there prevented the Alaafin from entering. I did not go but I have just being briefed.”

The inauguration of the stadium caused traffic snarl on the roads around Mokola, Adamasingba, Dugbe and the environs due to the influx of many important personalities and residents of the state to witness the ceremony and the first matches at the stadium.