Cameroon knocked out of the 2022 FIFA World Cup despite their 1-0 win over Brazil in the last match of group G on Friday.

Vincent Aboubakar fired Cameroon to a last-gasp 1-0 win over Brazil before being sent off but it was not enough to save the Indomitable Lions from an early World Cup exit — or to prevent the Selecao from topping Group G.

Tite made nine changes to his team after Brazil defeated Switzerland last time out, resulting in a sloppy performance at the Lusail Stadium.

Cameroon’s Devis Epassy made a series of outstanding saves before Mauricio Aboubakar nodded home a stoppage-time winner – then was shown a yellow card for removing his shirt.

Switzerland beat Serbia 3-2 in the group’s other game, ensuring Brazil topped the pool and eliminating Cameroon.

Brazil were indebted to Ederson for keeping the game level when he made a fine reflex save from Bryan Mbeumo’s header, while Aboubakar dragged an effort wide as Cameroon grew into the contest after the break.

Those two Cameroon forays seemed to spark Brazil into life, but Epassy somehow denied Eder Militao the opener when he tipped the defender’s scruffy effort onto his right-hand post.

Antony drew another save from Epassy as Brazil continued to press, but the Selecao were caught out at the other end two minutes into stoppage time, as Aboubakar guided Jerome Ngom Mbekeli’s cross into the bottom-right corner.

Aboubakar was shown a second yellow card for his joyous celebration, but the goal was not enough to take Cameroon into the last 16 as Switzerland joined Brazil in progressing. 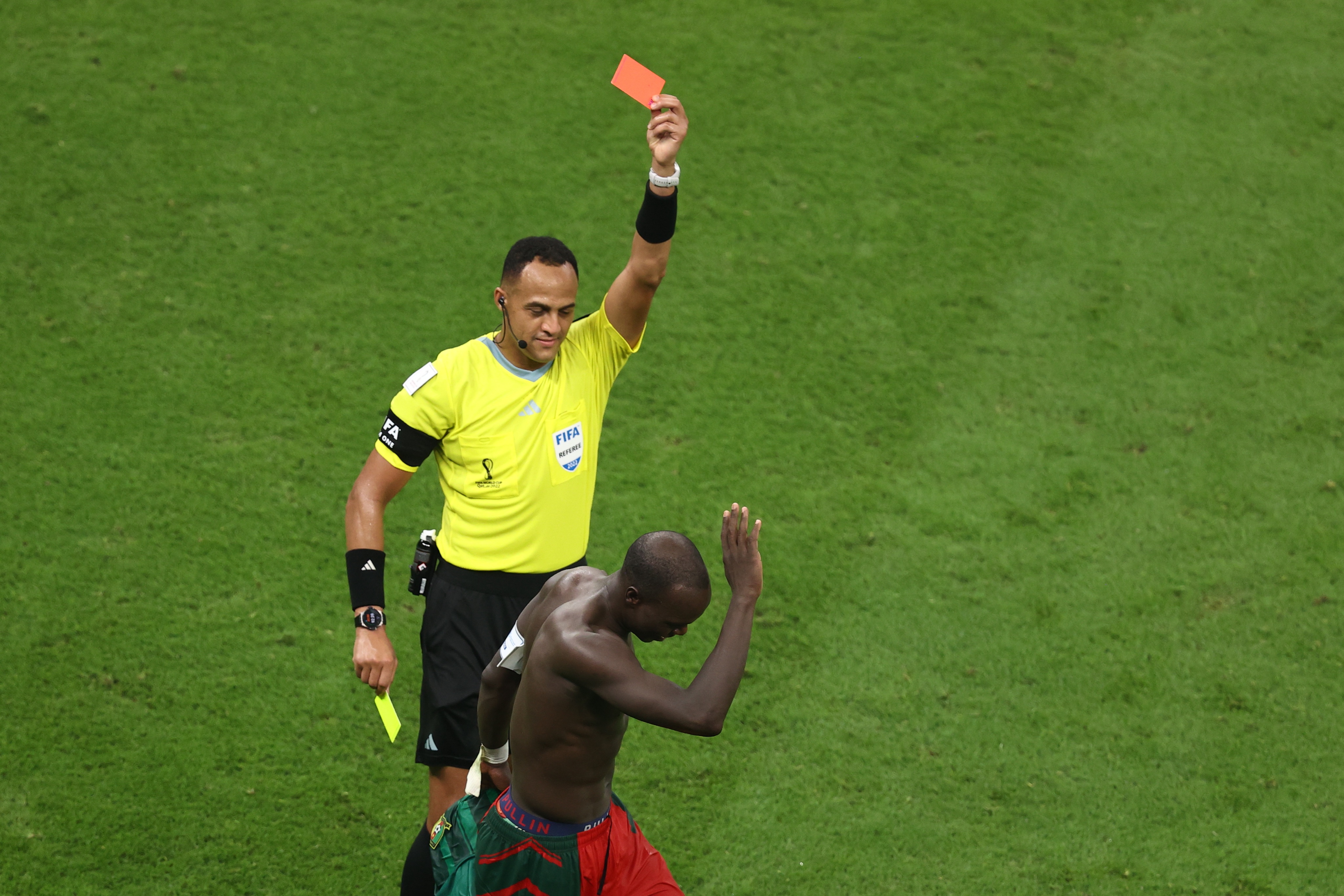 Watch the highlights of the match below;

Naaaaah Ismail Elfath (the referee) dapping up Vincent Aboubakar before giving him his red card was so wholesome. #CMR #BRA #FIFAWorldCuppic.twitter.com/KJEEkDIntM

Brazil had the opportunity to become the only team to win all three of their group games at a World Cup characterised by upsets and despite Tite making wholesale changes, few predicted anything other than a routine outing for a side unbeaten in their last 17 World Cup group games.

Brazil did not face a single shot on target in their victories against Serbia and Switzerland, becoming the first team to achieve that feat through their first two games at a World Cup since France in 1998.

However, Tite’s side were caught short by Aboubakar late on and will hope the striker’s well-taken header does not provide an example for other sides to follow in the knockout stages.

Brazil have finished top of their first-round group for the 16th time at the World Cup, four more times than any other side (Germany, 12). They have topped their first round group at 11 consecutive tournaments since 1982.

Despite victory in this match, Cameroon have been eliminated from the group stage in their last six appearances at the World Cup — they last reached the knockout stages in 1990.

– Cameroon are the first African team to beat Brazil at the World Cup — African teams had lost all seven previous matches against Brazil, conceding 20 goals.

Brazil failed to score in this match despite attempting 21 shots — it is the first time they have had 20 or more shots without scoring at the World Cup since 1994 versus Italy.

On Monday, Brazil will face Group H runners-up South Korea for a place in the quarterfinals. As for Cameroon, they are heading home despite their late heroics.