Abdelhamid Sabiri scored from an audaciously tight angle and fellow substitute Zakaria Aboukhlal added a second in stoppage time as Morocco pulled off a shock 2-0 win over Belgium in the World Cup Group F game Sunday.

Sabiri’s free kick from near the corner flag caught out Belgium goalkeeper Thibaut Courtois at the near post as it curled in for the 73rd-minute winner, securing only Morocco’s third victory at the World Cup finals.

Aboukhlal’s goal came on the counterattack, set up by Hakim Ziyech as Belgium was caught pressing forward for the equalizer.

The North Africans also had the ball in the net with the last kick of the first half as Ziyech’s free kick eluded everyone in the penalty area and caught Courtois unsighted, but a VAR check found skipper Romain Saiss had been just offside.

Belgium saw the majority of possession early on and dictated play, Michy Batshuayi forcing an early save from Munir Mohamedi, who came into the side as a very late change for Yassine Bounou.

Having been on the back foot for the majority, Morocco thought they had scored on the brink of half-time as Ziyech’s free-kick found its way into the net, but Romain Saiss was offside and adjudged to have blocked Thibaut Courtois’ line of sight.

Lightning struck twice for Martinez’s side after the break, as Sabiri whipped in a dangerous free-kick to the near post which found its way past Courtois and, while Saiss was again in the proximity, there was no offside flag to save Belgium this time.

Any hope of a late fightback from Belgium was wiped away in added time, Ziyech winning the ball off a poor touch from Axel Witsel and teeing up for Aboukhlal to smash home.

Watch the highlights of the match below:

What does it mean? Belgium’s fine run ends

Winning their past eight group-stage matches at the World Cup, victory would have seen Belgium set an outright record in that regard, while they had not lost at this stage of the tournament since 1994.

Morocco, with just two wins from 17 previous fixtures at the tournament (D6, L9), were largely unfancied before a ball was kicked in a group that contained two semi-finalists from Russia 2018, but they have avoided defeat against both.

A famous triumph inflicted Belgium’s first ever defeat to an African nation at the World Cup, and Morocco now just need a point against Canada to reach the knockout stage for the first time since 1986.

Hakim Ziyech retired from Morocco duty in February after being left out of the AFCON team. 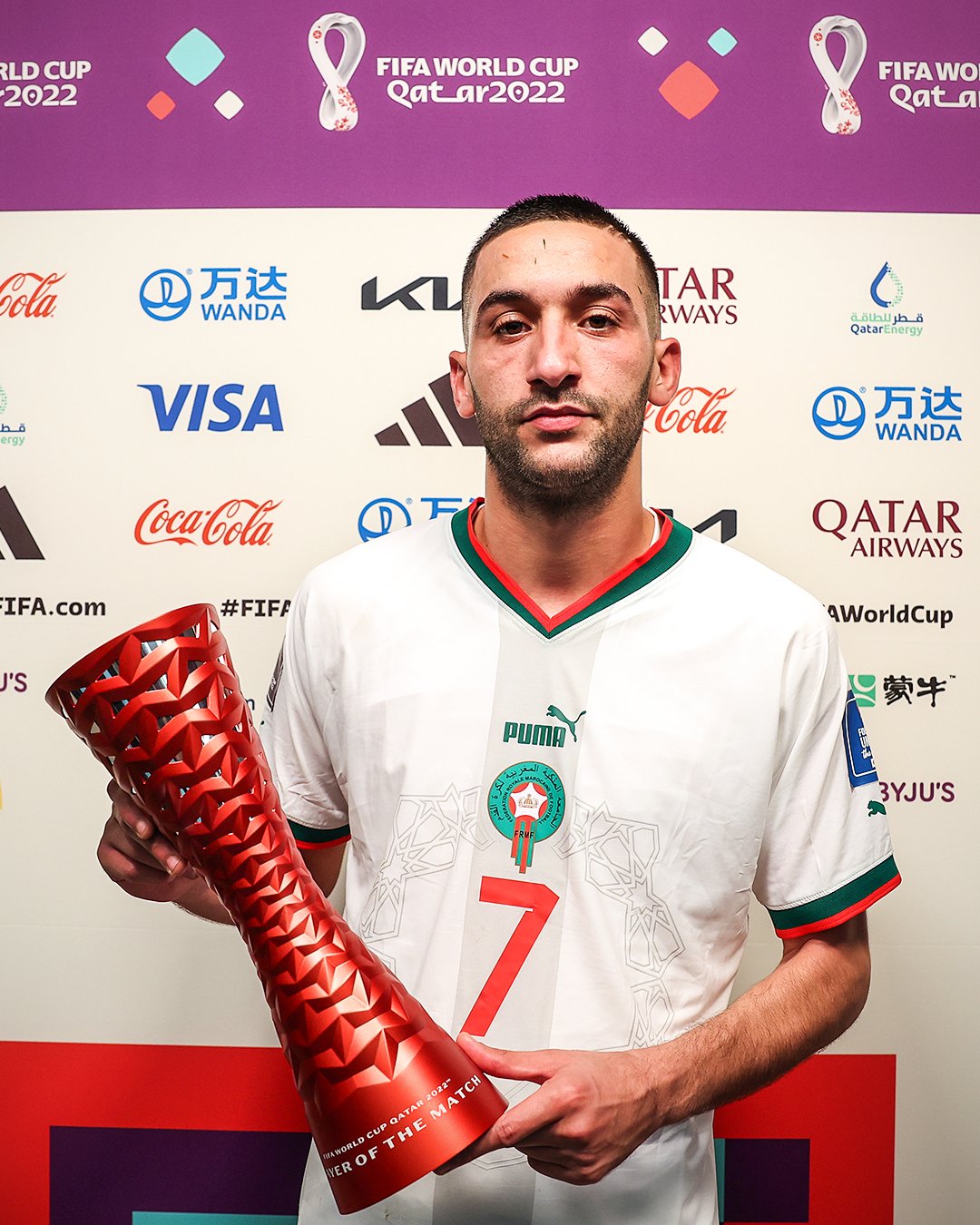 – Belgium have lost seven of their past 19 matches in all competitions (W9 D3), as many defeats as they had suffered across their previous 74 games combined (W57 D10).

– Belgium are just the third side to lose their 50th game at the World Cup, after England in 2002 (v Brazil) and Spain in 2010 (s Switzerland), though the latter went on to win the tournament that year.

– The Red Devils have only scored fewer goals after two games at a World Cup once before (none in 1930) – they had scored eight goals across their first two games in 2018.

Morocco tackle Canada in their final group match on Thursday, knowing a draw will be enough to secure a spot in the knockout stage, while Belgium lock horns with Croatia on the same day.