2022 World Cup: Lionel Messi scores in his 1000th game as Argentina advance to quarter-final after 2-1 victory over Australia

Lionel Messi scored in his 1000th game as Argentina advanced in the quarter-finals of the 2022 World Cup courtesy of a 2-1 victory over Australia in Al Rayyan.

Lionel Messi’s first ever goal in the knockout rounds of the World Cup sent Argentina ahead in the 35th minute, before Julian Alvarez doubled the advantage for the South Americans just before the hour.

Australia benefitted from a huge deflection in the 77th minute to halve the deficit, with Craig Goodwin’s strike hitting Enzo Fernandez before dropping into the back of the net, but the Socceroos could not find a second.

Argentina struggled to make any early headway as Graham Arnold’s men defended resolutely, but La Albiceleste had their seven-time Ballon d’Or winner to thank when they took the lead with their first real attack. 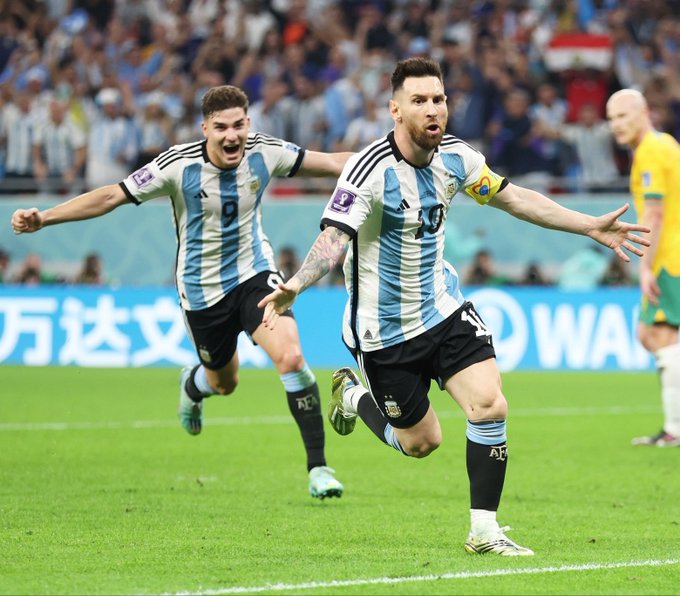 Lionel Scaloni’s side will face Netherlands in the final eight on December 9, after Holland beat the USA earlier in the day to reach the quarterfinals.

Only the second time in their history, Australia advanced to the round of 16 after finishing second in Group D behind France.

Argentina had a shout for a penalty in the fourth minute when Papu Gomez’s shot hit the arm of Keanu Baccus, but the play continued without any punishment for the Australians.

At the 17th minute, Gomez had Argentina’s first serious attempt from a wide angle, but his effort was always rising over Mathew Ryan’s goal, with Australia relatively comfortable.

With their physicality from set pieces, the Socceroos caused problems, with Harry Souttar in particular posing a threat.

Watch highlights of the match below;

On the day Messi brought up 1,000 career appearances – 169 of them for Argentina, he also inched closer to making another piece of history for his country.

Messi’s opener saw him surpass Diego Maradona and Guillermo Stabile’s tallies of eight World Cup goals. Only Gabriel Batistuta (10) has now outscored Messi when representing the country at the tournament.

While Messi stole the headlines on Saturday, his 22-year-old strike partner also demonstrated his worth with another energetic performance.

Alvarez’s goal may have owed much to the poor decision-making of Ryan, but it made the City striker just the sixth Argentina player to score on each of his first two World Cup starts, and the first since Hernan Crespo did so in 2006.

– Argentina have progressed from five of their last six round of 16 matches at the World Cup, the only exception during this run coming in 2018 against France.

– The last 16 remains the furthest stage Australia have ever reached at the World Cup, also eliminated at this point of the competition in 2006 against Italy.

– Fernandez’s own goal was only the second by an Argentina player at the World Cup, after Roberto Perfumo’s against Italy in 1974.

On Friday, Argentina will play the Netherlands, who they beat in the 1978 World Cup final and in the 2014 semi-finals.